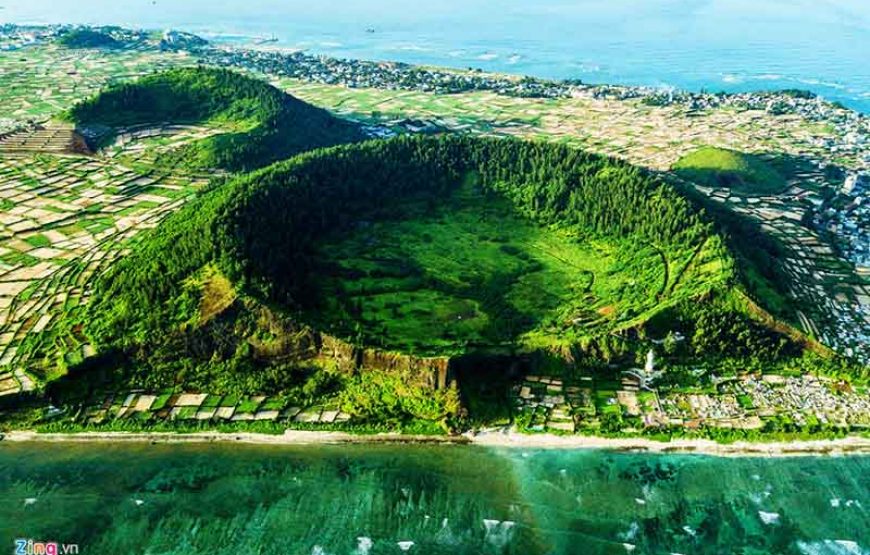 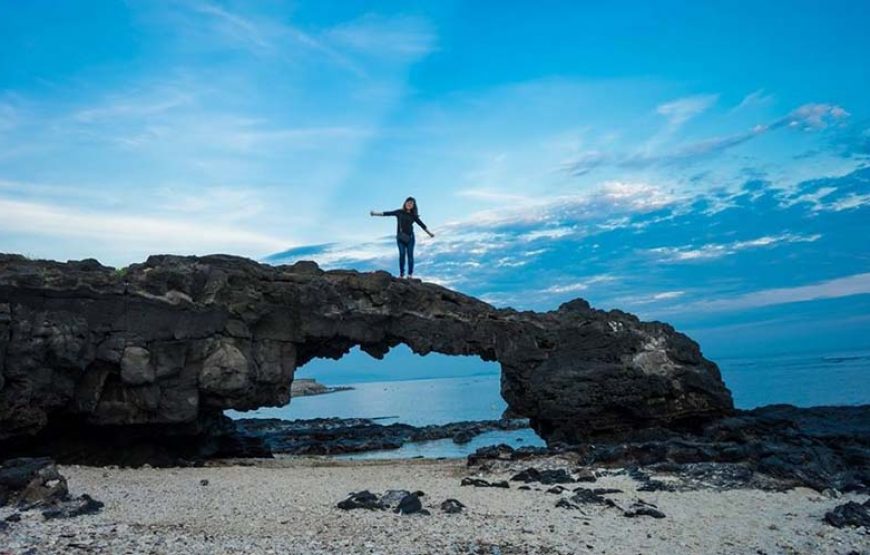 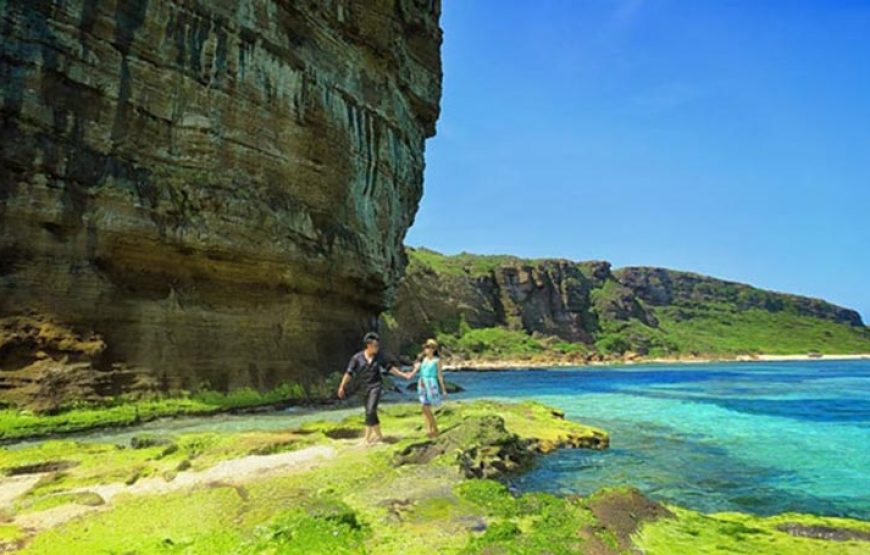 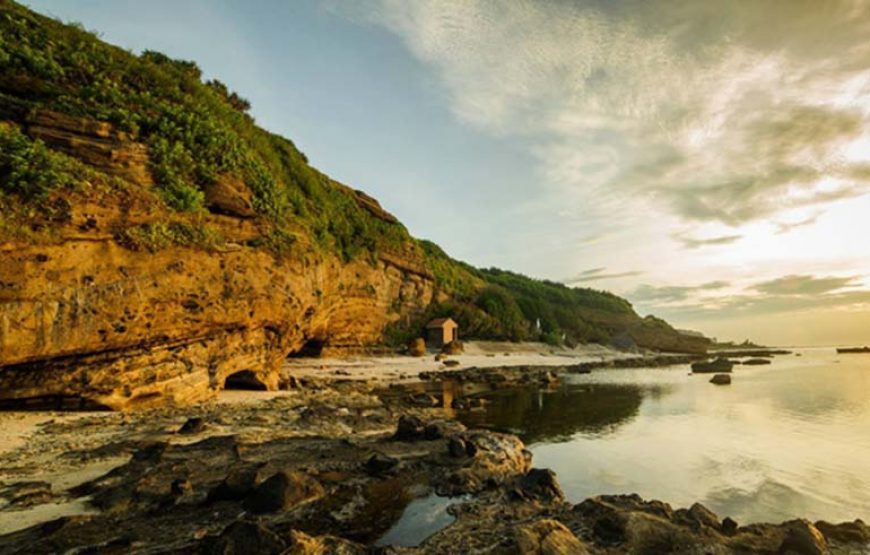 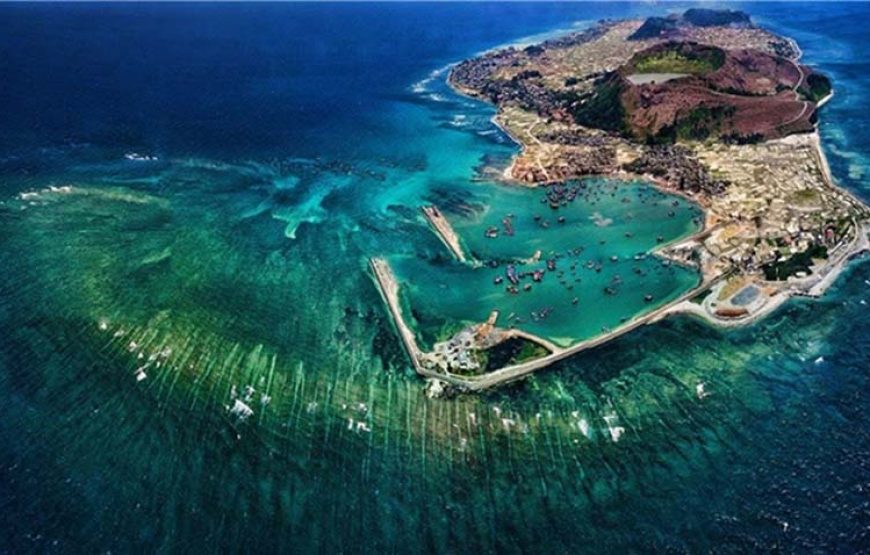 Why do you have to go to Korea or Bali to see Jeju or Maldives, when you can find a unique beautiful volcanic island right in Central Vietnam? This island is named Ly Son, where the high blue skies and crystal ocean combine and make themselves a masterpiece of nature. According to the scientists, Ly Son Island was formed due to the volcano eruption million years ago. Located 30 km from the mainland, Ly Son Island  is not only famous for its garlic plantation but also attracts many young visitors to discover its beauty that can not be found anywhere else in the world.

Nowadays, the remnants from the volcanic eruption on Ly Son Island are 5 mountains. Volcanic eruptions and inactivity have created the spectacular natural landscapes on the island. In particular, the Thoi Loi Peak is the highest peak of Ly Son Island (149 m). On the top of the mountain, there is a freshwater lake providing fresh water for both Great and Small islands. Standing on the top of Thoi Loi, you can admire the whole scenery of Ly Son island, with the combination of the green color of the trees in harmony with the jade blue of the ocean. All created a wonderful natural painting named Ly Son.

Cau Cave is at the foot of Thoi Loi peak. The cave was formed thousands of years ago from lava rock, eroded by waves and breezes deep into the mountains. The scenery here is quite wild but really beautiful, romantic and attractive. The sea here is the place where Ly Son local people often go fishing. There are also a lot of Gracilaria, perhaps because of this, this cave is called Hang Cau (“Cau” in “Rau cau” means Gracilaria).

Cave Pagoda (in the name of Thien Khong Thach Tu) in An Hai Commune belonging to the Great island, was built under the reign of King Le Ky Tong by Tran Cong Thanh, one of the people who had been here to establish An Hai and An Vinh ancient villages. In front of the pagoda and in the middle of the courtyard, there is a large statue of the Goddess of Mercy seated on the lotus pond. The cave is 24 m long and has a ceiling height of 3.2 m and 480 m². It is called Cave Pagoda because it is located in the largest cave in the cave system in Ly Son, which is made up of Thoi Loi mountain range, lava rock, and 20 m high cliffs.

The favorite place of a lot of young people couples to take photos at sunset is To Vo Port. From the main pier to the entrance of Ly Son, turn left to go along the small road to the temple, you will see a small cliffs close to the sea.

In Ly Son, you will hear the story of Hoang Sa Navy. For ages, this story has been told, about the heroic heroes of the Nguyen Dynasty, bravely paddling across the Hoang Sa archipelago to perform the task of setting up a landmark. The right to protect the sea and islands of the homeland.

08:00am We pick you up at the rendezvous, then we start our exciting trip to Ly Son Island.

12:00am Arriving at Quang Ngai city, we having lunch at the restaurant.

Hang Pagoda – It is called “Hang Pagoda” due to its location in the biggest cave of the cave system on Ly Son (“Hang” means cave). It is also one of the most special pagodas in Vietnam. Cau Cave has been “carved” by lava, sea waves and wind into the mountain for thousands years. The wild scenery here keeps a romantic and fascinating beauty, which can charm any visitors. Hoang Sa and Bac Hai Navy gallery – where many evidences of sovereignty over the islands of Vietnam are reserved.

06:00pm Having dinner of Ly Son specialties such as garlic salad and turban snails...

Evening: Having dinner of Ly Son specialties such as garlic salad and turban snails

Morning: Getting up in the early morning, you can freely visit Ly Son port and fish market.

06:30am Having breakfast of Nhum rice soup.

Duc Pagoda – also called as monk-free pagoda. It is told by the local that long time ago, the Goddess of Mercy seated in this pagoda as the guard of this island to protect it from the natural disasters.

To Vo Gate– The ideal place for you to admire the scene of the dawn on the island.

Visiting The garlic field and learn about the garlic growing progress. You will understand why Ly Son garlic is so famous all around Vietnam nowadays.

Arriving at Small Islet, you will know more about the local life and visit the shallot field

You use the tram service to reach Binh An Beach, where you can swim, have fun at the most beautiful beach in Ly Son with smooth white sand. Afterwards, you will dive and see the coral reef (self-sufficient cost of 60,000VND/pax).

You will be equipped with locksmiths, life jackets and diving suits, to see countless marine species under the vast ocean.

11:30am Returning to the great island and having lunch at the restaurant.

06:00pm Dropping you off at your places. End of services.

Good bye and see you in the next trips of Dacotours!