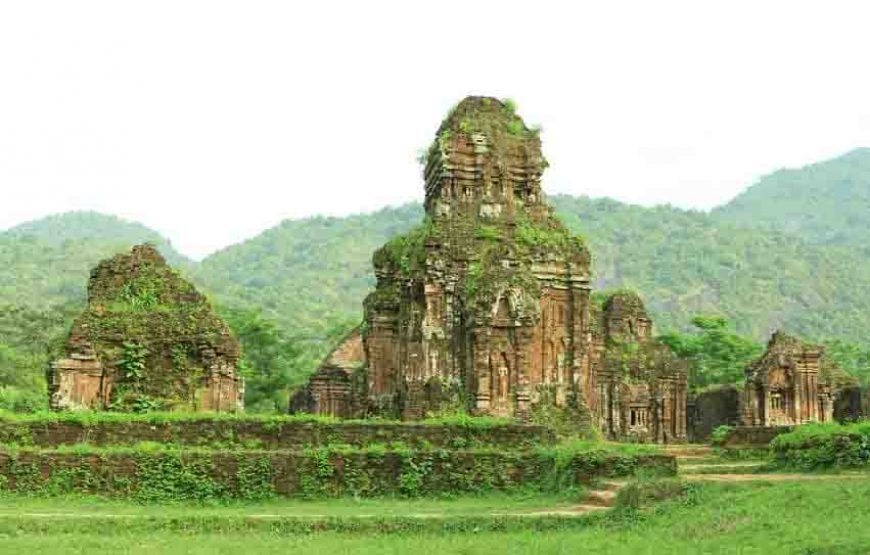 My Son Sanctuary (Duy Phu commune, Duy Xuyen district, Quang Nam province), which is located about 69km from Da Nang city, is a destination that attracts many visitors with its beauty, grandeur and mystery of the ancient Cham culture. Let’s explore the mysterious beauty of this architectural cluster in  Da Nang – My Son Sanctuary daily tour, brought to you by Dacotours.

My Son Sanctuary is a complex of Cham temples, nestled in the middle of a valley surrounded by thick forests and mountains. My Son was built in the fourth century. For ages, some towers were added to this shrine that made this land become the main relic of Cham culture in Vietnam. Besides the ritual functions of connecting the Kings and the Gods, My Son was also the center of culture and beliefs of Cham dynasties and the place for burial of powerful kings and shamans.

After the first construction in the fourth century, all of the wooden buildings were destroyed in a fire. At the beginning of the seventh century, King Sambhuvarman gave an undertaking of using bricks to rebuild the temples, which remains until today. The next kings then continued to repair the old temples and built new ones to worship the gods. Brick was a good material to preserve the memory of this mysterious community. However, the technique of building these temples is so far a secret that people still have not figured out.

Temples and towers in My Son are divided into several clusters, according to the same principle. The structure of each cluster consists of a main temple (Kalan), surrounded by smaller towers. The main temple represents Mount Meru – the center of the universe, the convergence of the gods and the worship of Siva.

We will pick you up from Da Nang city, and then we go to visit Hoi An to visit My Son Sanctuary – one of World’s Heritage Sites

The electricity car will pick you up from the gate to My Son Sanctuary area. Then you will take a walk to pass 500m of tropical jungle surroundings to get My Son area center. It’s a remarkable architectural construction developed over a period of ten centuries.

Via the stories, our tour guide will show you the formation & development of Champa Kingdom. It’s extremely interesting and knowledgeable information.

Bricks are main material for all construction here. However, it has yet been unable to be figured out the explanation for the linking material. Even these days, this still remains as an attractive secret to tourists.

Leave My Son Holylland Land and return to Hoi An Ancient Town for lunch.

Having lunch in a local restaurant

We will depart to head back to Da Nang city

We hope this tour will bring you many unforgettable memories and joyful moments. See you again in other tours of Dacotours!

– This price does not apply for Vietnam Holidays and Tet Holidays.

– We are closed on 24th and 25th of January. Sorry for this inconvinience!